Summary: The continuously active winter for the United States could bring treacherous conditions to the South this week, as a potentially dangerous ice storm appears to be in store for Atlanta and parts of Northern Georgia. The same system is also expected to bring some snow to the Mid-Atlantic Region and the East Coast later in the week. No other significant threats to shipping appear to be in store for the rest of the globe at this time.

Southeast United States
Current weather model runs for Wednesday are not looking good for Northern Georgia, specifically the Atlanta metro area. A winter storm is expected to begin to affect the southeastern states early Wednesday morning and continue into early Thursday morning, with precipitation stretching from Mississippi through the Carolinas. With this storm, it appears likely that the northern half of Georgia will see significant amounts of freezing rain, reaching as far south as Macon, Georgia. 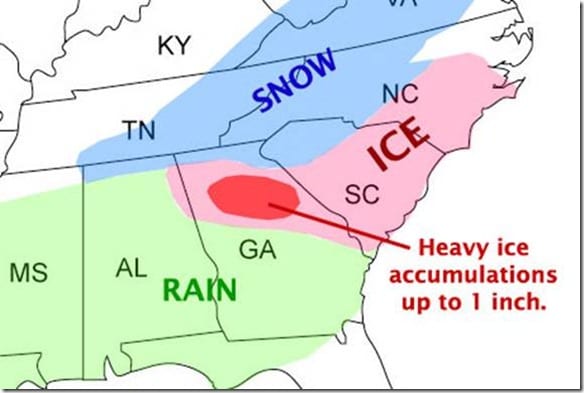 
Unfortunately the most heavily affected area is setting up to be Atlanta, as numerical model runs are showing steady freezing rain affecting the metro area nearly all day, from approximately 7 am to 7 pm, before switching over to snow. These models are currently looking quite ominous with the ice totals, as forecasted accumulations are currently ranging from a third to a full inch of ice. After the freezing rain ends, the city is also expected to receive 1-2 inches of snow, which will only make matters worse for an area that is not used to handling winter weather. Regardless of the exact final totals, expect major delays for any transportation in and out of Atlanta on Wednesday. With such major ice accumulations currently being predicted, I would not be surprised to see the cancellation of all flights in and out of ATL on Wednesday.

Elsewhere across the south, ice is also expected to affect other portions of Georgia and the Carolinas, albeit to a lesser degree. Cities including Augusta, Charleston, and Wilmington can expect significant accumulations of 0.1 to 0.2 inches of ice. Areas expected to see mostly snow will likely see totals in the range of 3-6 inches. 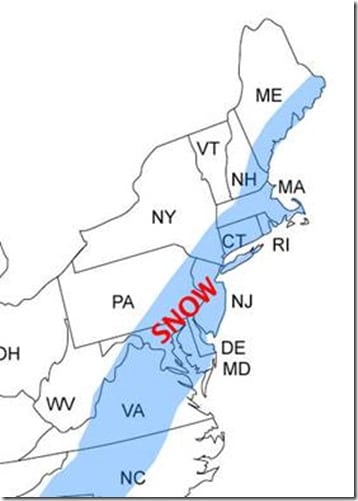 Expected areas of significant snowfall for late Wednesday through Thursday.

After the winter storm exits the Southeast, it is expected to begin affecting the Mid-Atlantic region on late Wednesday night and the Northeast on early Thursday morning. Compared this storm’s passage through the Southeast, there is much more uncertainty in terms of how much precipitation will occur as it moves along the East Coast. Some models are currently predicting that areas in this swath of snowfall will only see 2-3 inches, while other models are suggesting up to a foot. It is still a bit too early to tell which prediction will turn out to be true, but at this point a middle-ground of 5-8 inches seems the most reasonable. The snow is expected to exit the Mid-Atlantic region during the early evening on Thursday, and the Northeast in the early morning hours of Friday. 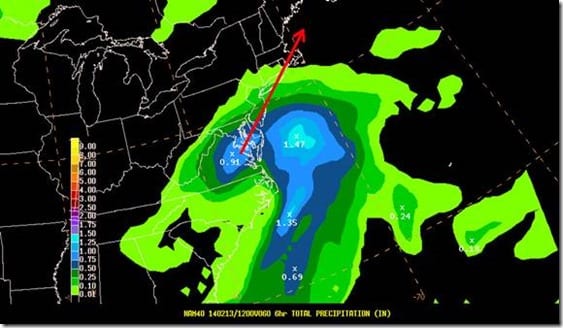 Forecasted storm position on Thursday at 7 am Eastern time, with the predicted track of the system. Also depicted are the lingering snow showers in Georgia.

Thanks to this approaching winter storm, major metropolitan areas that could see shipping delays on Thursday due to this storm include:

Europe
No significant weather threats to shipping are forecast.


Asia
No significant weather threats to shipping are forecast.

Australia and Oceania
No significant weather threats to shipping are forecast.

Atlantic Ocean
No significant weather threats to shipping are forecast.

Pacific Ocean
No significant weather threats to shipping are forecast.

Indian Ocean
No significant weather threats to shipping are forecast.