A Quiet Week:  Minor Systems in Both Hemispheres

Summary: Typical winter conditions are expected to be seen throughout most of the Northern Hemisphere this week, including two winter storms that will bring the Northern U.S. some light snowfall. Meanwhile, Australia will feel the effects of a tropical system making its way towards the northern coast.

Following a week that featured intense blizzards and bone-chilling temperatures, the United States is expected to return to a more normal winter pattern this week. Two fast moving winter storms are expected to impact the upper Midwest during the mid-week with snow and gusty winds. The first of these systems is expected to impact the upper Midwest on Tuesday afternoon, where snowfall throughout most of Wisconsin will range from 4 to 6 inches. Large cities affected will include Minneapolis and Chicago, although these cities are only expected to receive 1 to3 inches of snow, so any delays should be minimal. 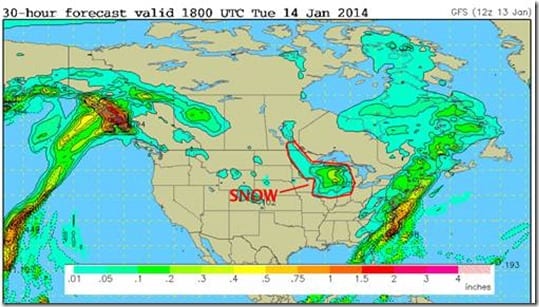 The second winter storm is expected to move through the Midwest on late Thursday through early Friday morning, and is forecast to bring lighter snowfall amounts to the same areas affected by the winter storm two days prior. The highest snowfall totals will once again be seen in Wisconsin, and the snow totals in areas ranging from Minneapolis to Detroit should be 1 to 3 inches. 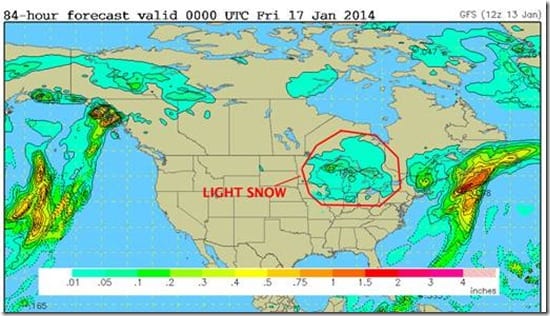 Australia
Australia may see its first tropical cyclone make landfall this year in the near future, after what has been a relatively quiet tropical cyclone season thus far in the Southern Hemisphere. A strong tropical disturbance is currently located just to the north of Darwin, Australia and is expected to make landfall in Australia at approximately 9:00 UTC on Tuesday. The Joint Typhoon Warning Center is currently giving the storm a 50% chance to develop into a tropical cyclone before landfall. Regardless of an official formation, this system is expected to bring heavy rains and gusty winds to Darwin on Tuesday. 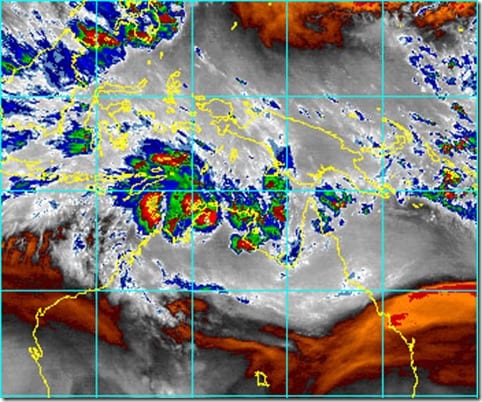 Infrared image of the tropical disturbance on Tuesday at 2:00 UTC.  (Source: NOAA)