Summary: The long, harsh winter for the Eastern United States is still going strong, as March will be welcomed in by a potent, late season winter storm that is expected to affect the eastern half of the country. 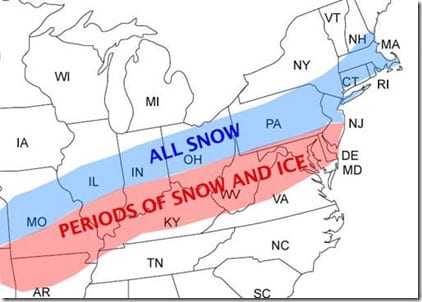 The storm system that brought much-needed rain to California is expected to pass over the Rockies and merge with a cold front on late Saturday, bringing snow and ice to the Midwest and East Coast. The late season storm is forecast to begin dropping snow and sleet early Sunday morning over Missouri before moving into Indiana and Ohio in the late afternoon hours. It is then expected to continue eastward where it will bring more mixed precipitation to the East Coast late Sunday night and early Monday morning.

Areas expected to see precipitation in the form of snow will likely see accumulations of around 6-10 inches, while areas with more mixed precipitation will see totals around 3-6 inches.

Metropolitan areas which can expect some transportation delays on Sunday/Monday include: