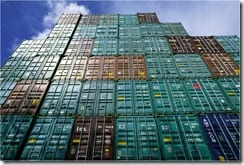 In today’s post, we take a brief look at a perennial problem in the ocean freight shipping industry: peak season delays.

Per a recent report by Drewry Maritime Research, an increasing amount of ocean cargo from both Asia and Europe is being delayed by late deliveries or rolled bookings as the 2013 peak season continues to build (Source: Journal of Commerce).

For those of you who are seasoned veterans of the annual holiday rush, this is old news.?? If you’ve just started a company recently, or have just begun importing, it is something to pay close attention to.

Background
Each year around August, ocean carriers worldwide begin to experience a spike in business as importers rush to get their products into the distribution pipeline in time for the holidays.?? As a result, peak season delays and rolled bookings become commonplace as space availability tightens.?? The severity varies from year-to-year, absed on market conditions.

But it’s only August you say!?? While you might still be lying on a white sandy beach with an umbrella in your drink (or a at least wishing that you were), for manufacturers and shippers it is prime time.?? There are only now less than 100 days before the annual “Black Friday” shopping extravaganza here in the United States. With ocean transit times of 20-30 days, plus additional time to get the freight to distribution center and then routed out to the store level, the clock is ticking.

Not surprisingly, ocean carriers regularly implement what is commonly known as a PSS, or Peak Season Surcharge, this time of year.?? That’s a polite way of saying price gouging in the eyes of many shippers. The annual percentage varies based on market conditions.

For a bit of insight into this year’s peak season, see a related blog post in the 3PL Wire

Suggestions
There are only so many options available when it comes to avoiding peak season delays and rolled bookings. Obviously, the best alternative is always to plan ahead and ship early. While there is clearly a cost to tying up your cash in inventory, it beats the alternative of not having your product on store shelves in November. At a very minimum, you need to allow a couple extra weeks for your shipment to transit this time of year, just to be safe.

Alternately, if cash or production considerations prohibit advance shipping, consider splitting your shipment.?? That is, consider flying a small portion of your freight to fill the orders of key accounts and early-season orders.?? it’s certainly more costly, but once again, consider the alternative.?? You can then back the rest of your orders up with movement by ocean freight in the weeks following.

In short, there is no way to avoid the surcharge, but plan ahead, book early and you’ll have the jump on your competition.