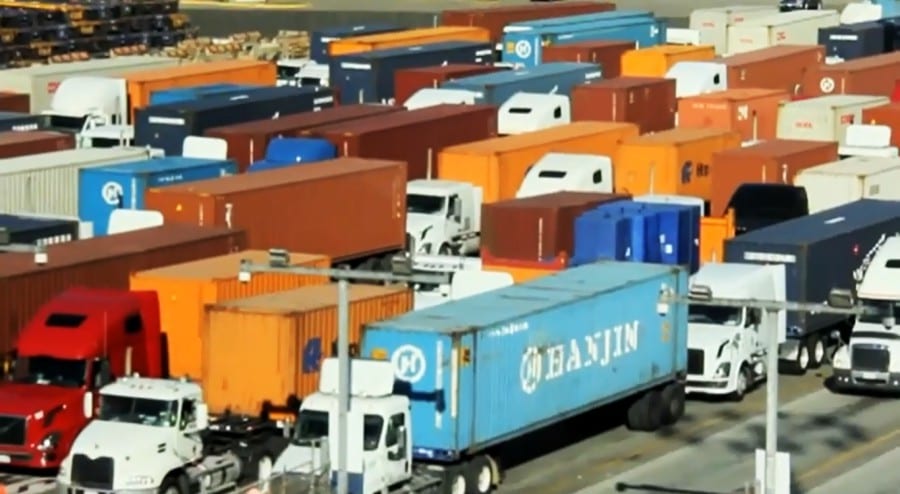 ‘Tis the Season… To Ship Early

With the peak of the holiday shipping here, port congestion at the nation’s two largest container gateways continues to grow, leaving truckers and importers fuming. Severe congestion at  the Port of Los Angeles and Port of New York-New Jersey has been widely reported, with the situation in Los Angeles becoming increasingly dire.

“The vessels keep arriving and the trucks keep arriving,” said John Cushing, president of PierPass Inc., which manages the extended gates program for the 13 container terminals in the port complex. Yet the backlog continues to grow.  “There are times when the imports are not moving. The numbers are outrageous —6,000 to 7,000 containers just sitting at the terminals,” he said.

One terminal operator in Long Beach said he is working only two cranes each week per vessel, rather than five cranes he should be, because the yard cannot absorb any more boxes. Unloading of vessels has slowed to the point that some terminals are in danger of having to tell vessel operators to slow down their arrivals because the ships can not be handled on schedule.

So what is the cause of this rapidly snowballing problem? 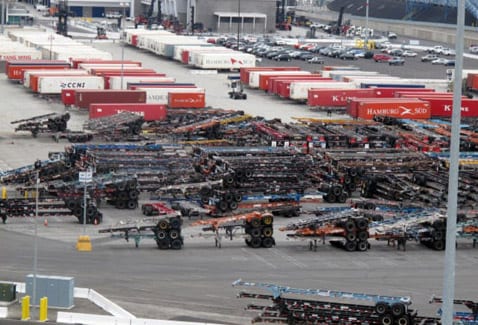 In Southern California, truckers and terminal operators point to chassis being in short supply, in the wrong place at the wrong time or chassis being out-of-service as being the main culprit.

Ocean carriers during the last five years have exited the chassis business in Los Angeles-Long Beach and New York-New Jersey, selling the assets to chassis leasing companies. Terminals on both coasts immediately began to report that they did not have enough chassis, not because the overall supplies in the harbors were reduced, but because the business relationships involving cargo interests, shipping lines, terminal operators and chassis providers had changed. It can now take truckers twice as long to get an empty chassis, often from an off-site location, at increased rates. Those increased costs have been passed along to shippers, where they were previously built into ocean carriers’ pricing.

Truck & Driver Shortage Continues
As if the chassis shortages aren’t enough, truck drivers in the US are voting with their feet and leaving the industry at an “unsustainable pace”.  These are the words of Federal Maritime Commission (FMC) commissioner William Doyle, who is at the forefront of an investigation by the Washington agency into port congestion. It is a combination of depressed wages, rising equipment cost and increased regulation.

The situation is resulting in many importers, including big box stores like Walmart and Best Buy, grappling with chronic supply chain delays.

Terminal operators say a shortage of truck drivers in the ports is also causing the dwell times for containers and chassis to skyrocket.  Alex Cherin, executive director of the Harbor Trucking Association in Los Angeles, said the HTA saw the driver shortage surface several years ago as a result of the clean-trucks program in Southern California. The truck and driver population of mostly owner-operators went from 15,000 to less than 10,000 as non-compliant trucks were phased out.

Ports Struggle to Handle Larger Ships
In another article on this topic, Peter Leach of the Journal of Commerce recently wrote:

“As carriers deploy ever-larger ships, the sheer volume of containers aboard those vessels is starting to overwhelm major gateway ports, challenging their ability to unload import containers on a timely basis. The delays are exacerbated by the alliances carriers are joining to operate and fill the mega-ships. Although this has resulted in fewer ship calls at major ports, the calls by alliance mega-ships are absorbing more port capacity to handle those calls and taking more time to load and unload.”

Add to it many ports’ inability to upgrade their level of automation due to union work rules and strike threats, and we have too many oversized ships, arriving too quickly and clogging an outdated infrastructure. It is not a situation likely to change soon.

Demurrage Charges Soar
The crunch at the ports on both coasts is not only causing importers to panic, with chains like Walmart, Best Buy and others already fearful of not getting enough inventory to stores in time for Christmas, it is also driving up costs. Truckers are waiting in line 6-8 hours in some cases, just to pick up a container.  Add to that the demurrage charges being levied by the steamship lines on their customers and importers are taking it on the chin.

Demurrage complaints were prominent at a Oct. 1 Federal Maritime Commission hearing on port congestion. In a speech the following week to the annual New York-New Jersey Port Industry Day, Commissioner William Doyle said the issue “is surfacing more and more.”

“I have heard numerous examples of shippers who are ready, willing and able to pick up their containers but through no fault of their own are precluded from getting their boxes. As a result, they have to pay a fine for the storage days on the terminal,” he said.

The chart below gives an example of the daily cost to an importer from having their container stuck in the port. 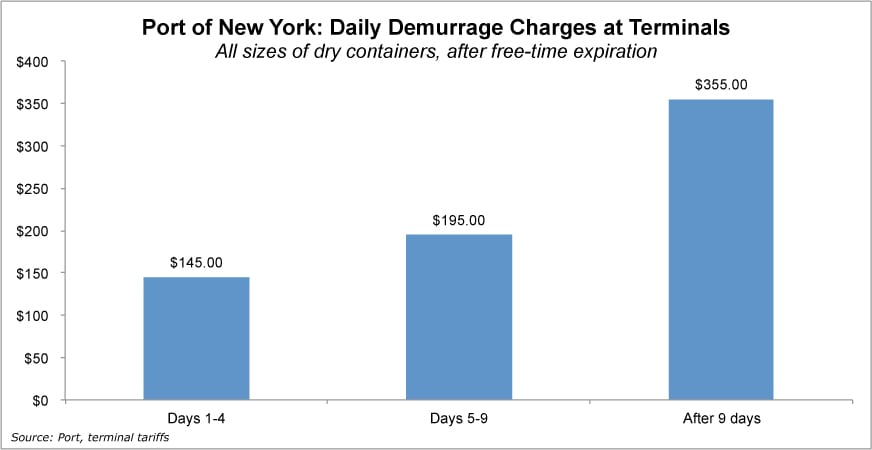 So what is an importer to do in the face of these daunting obstacles to getting their freight on time?  For now, plan on an additional 7-10 days to get your freight delivered. Don’t blame your forwarder or freight broker. They are just as frustrated as you are.  And keep a bottle of aspirin handy.

Editor’s Note:  The Journal Of Commerce contributed to this post.