Global Weather Synopsis for the Week of 11/17/2013:
By Blake Cotcamp
Meteorology Intern

Summary: Thanks to the approaching winter in the Northern Hemisphere, tropical cyclone activity is winding down, with only two storms churning out over open water this week. After being hit with severe weather late last week in the Philippines and U.S. Midwest, both the U.S. and the rest of the world can look forward to a much needed respite from severe weather in week ahead.

Atlantic Ocean
The last gasp of the Atlantic hurricane season appeared late last weekend as Subtropical Storm Melissa formed as a late-season cyclone in the wide open Atlantic. It is forecast to stay out to sea without affecting any land areas so its greatest effects will likely be limited to rough seas between Europe and North America. Although it is currently a subtropical cyclone (a hybrid system that exhibits some amounts of both tropical and non-tropical characteristics), it is forecast to become fully tropical late Tuesday. As of Monday night, Melissa featured sustained winds of 60 mph, and that intensity is predicted to remain relatively constant over the next few days. 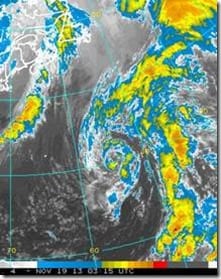 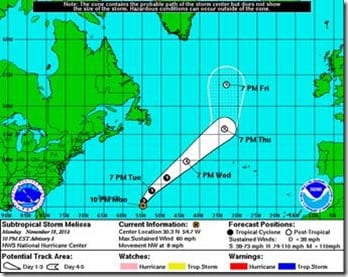 Indian Ocean
In the Bay of Bengal, there is currently an area low pressure located approximately 250 miles off of the east coast of India that has the potential to develop into a tropical cyclone over the next few days. If it is able to develop, the cyclone would likely track west-northwestward and make landfall in India sometime on late Thursday. With all that being said, this storm is destined to be nothing more than a rainmaker, and is unlikely to have any adverse effects other than rough seas in the Bay of Bengal.