Global Weather Forecast for the Week of 1/19/2014:
Snowstorms in the US and Europe

Summary: As winter peaks in the Northern Hemisphere this week, multiple areas of the globe will see snowfall that is typical for this time of year. The east coast of the United States is in for snow early in the week and potentially over the weekend, while Central Europe is expected to receive snowfall during the midweek. Significant disruption to both air and ground shipments in and around the Mid-Atlantic states may be expected, with lingering system wide delays anticipated through Wednesday.

Expected areas of significant snowfall for Tuesday and Wednesday.

The East Coast of the United States is in for another round of snow on Tuesday, including the Mid-Atlantic region’s first major snow of the year, as a low pressure system will strengthen as it moves southeastward out of the Midwest. The storm is expected to arrive in the Mid-Atlantic region on early Tuesday afternoon and should linger on in this region through the end of the night. Cities expected to see the largest snowfall totals on Tuesday from this storm include Baltimore, Washington D.C., and Philadelphia with totals ranging from 4 to 8 inches. 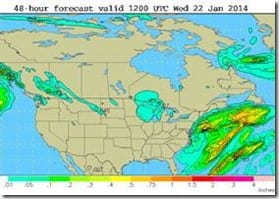 Storm position at 7 pm Tuesday (left) and 7 am Wednesday (right).

After the storm moves out over the Atlantic, it is forecast to take a northward turn and parallel the coast on Wednesday. This will bring significant snowfall totals to much of the Northeast coast, with the heaviest snowfall occurring during the late morning into early evening. Due to the forecasted motion of this storm, areas closest to the coastline are expected to see the highest amounts of accumulation, including cities like New York and Boston, where snowfall totals could range from 5 to 9 inches.

It is also worth noting that the models are currently predicting another snow storm to affect the Midwest and Northeast on Saturday, January 26. However, it is still too far into the future to know the exact track and intensity of this potential storm. 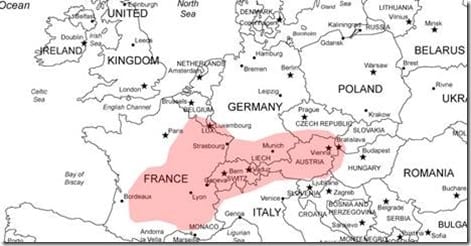 Expected areas of significant snowfall for Thursday and Friday.

The same system impacting the United States early this week is expected to move across the Atlantic and affect parts of Western and Central Europe with snow on Thursday and Friday. The low pressure system is expected to begin affecting France during the late afternoon in Europe on Thursday and progress eastward where it will bring snow to most of Austria and southern Germany during the day on Friday. Snowfall totals are expected to be moderate, ranging from 1-2 inches in France to 4-6 inches in Austria and Germany. Cities likely to receive snow from this storm include Geneva, Munich, and Vienna. 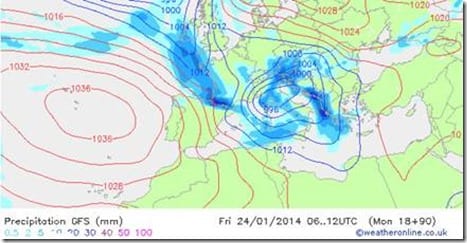