Summary: In this Weekly Weather Forecast for Shipping, many parts of the globe will see their first snowfall of the season this week as winter begins to set in throughout the Northern Hemisphere. Of particular note for this onset is the arrival of the first significant winter storm for the Eastern United States this season, which could interfere with any Thanksgiving plans both personally and transport wise.  Roads are expected to be slick with airport delays expected in the week leading up to Black Friday. The storm may pose significant challenges to stores looking to get a last minute shipment of product in stock before the weekend.  Warm weather season hasn’t ended everywhere however, as a cyclone in the Bay of Bengal is poised to strike India later in the week.  This tropical cyclone threatens ocean traffic transiting the port of Chennai, India and should be monitored closely.

It appears that the East Coast of the United States will be in for its first Nor’easter of the season this week as a storm system currently centered over Texas is forecast to move off the coast and intensify over the Atlantic. This could create some complications for Thanksgiving transportation, as the storm is expected to dump heavy rains along the East Coast for most of Wednesday (November 27). There is also a good chance for snowfall to occur in the Mid-Atlantic states, as cities like Washington D.C. and Philadelphia could receive 2-4 inches of snow on Wednesday afternoon. Airport delays may be expected at various cargo gateways, with road conditions potentially resulting in 1-2 day transit delays to ground shipments as well. 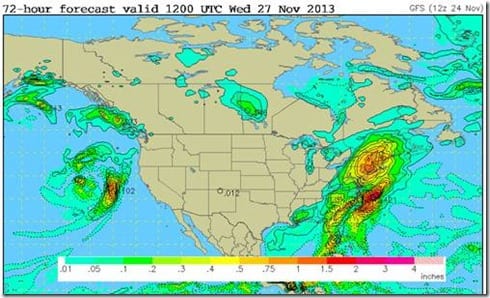 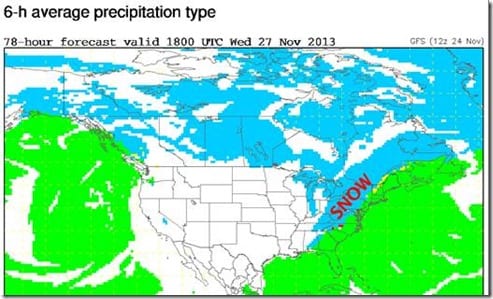 After dealing with a relatively weak tropical storm last week, India is facing a more significant tropical threat this week as Cyclone Lehar is currently churning towards the east coast of the country. It is forecast to be a Category 3 equivalent cyclone with 115 mph winds at landfall, which should occur somewhere slightly to the southwest of the city of Visakhapatnam on mid to late Thursday. This storm has the potential to cause significant delays along a large portion of India’s coastline on Thursday due to its high winds and heavy rainfall.  In particular, shipments transiting the port of Chennai, India are at risk. 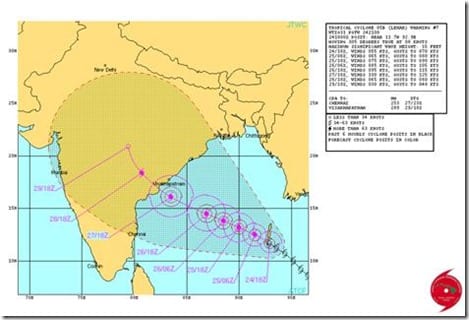 As it progresses towards the coast of India, Cyclone Lehar will also create some very rough seas along its forecast path in the Bay of Bengal. As of 11:30 Eastern time on Sunday, Lehar was just below hurricane-equivalent status with 70 mph sustained winds. The storm is expected to steadily strengthen up until its landfall sometime on Thursday, meaning it will be at its most dangerous later in the week, as the possibility of a Category 4 peak strength can not be ruled out. Any shipping interests in the Bay of Bengal should keep a close eye on the progress of this cyclone. 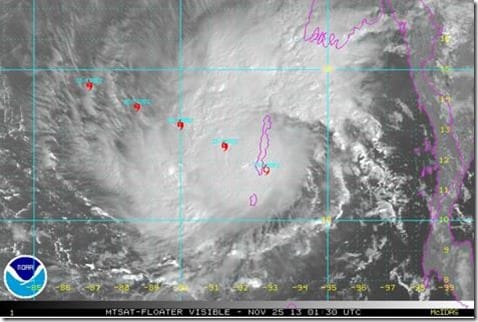