Summary: In this week’s global weather synopsis, a snowy winter for the Northern Hemisphere is expected to continue this week as another winter storm takes aim for the eastern half of the United States, where predicted snow totals have the potential to cause major delays. Meanwhile, weather across the rest of the globe is expected to remain relatively uneventful. 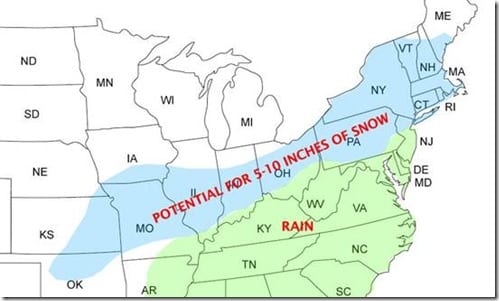 Expected areas of significant precipitation for Tuesday and Wednesday.


Though the jet stream pattern that had been bringing the Eastern United States bitterly cold temperatures has broken, the pattern that has taken its place is one that is much more conducive for major snow events in the next few weeks.

And right on cue, mother nature has decided to bring a major snow event to the country as an upcoming storm is expected to affect a wide swath of the U.S. ranging from Oklahoma to New England. The system is expected to develop midday Tuesday over Northern Texas and track to the northeast. States in the plains should expect to see the heaviest snowfall occur in the late morning and early afternoon hours with accumulations of 5-7 inches in the most heavily-affected areas, which will likely cause significant transportation delays. 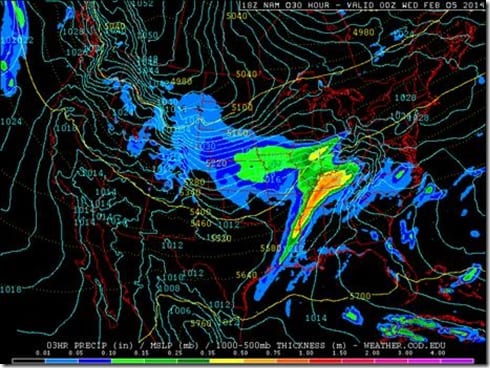 From there the forecast becomes trickier, as the models for this storm are in disagreement on how far north the storm will track. Snow is expected to arrive in the Midwest in the late afternoon hours and continue through the night into Wednesday morning. Some models are suggesting snow totals of 8-11 inches while others are suggesting a much more pedestrian 3-6 inches and this variation could heavily affect the delays that result from this storm. A city that should take particular note of this system is Cincinnati, as its location on the rain/snow border is setting up a significant chance for solid ice accumulations, which could have a major effect on roads and runways.

As this winter storm continues to push eastward, it will affect the Northeast, starting in the early morning hours on Wednesday. Models are in much better agreement for snow totals in the Northeast, as the coastal states should see accumulations of 6-10 inches of snow. This system is forecast to dump snow all-day Wednesday over the eastern seaboard until it tapers off late Wednesday night. Once again, expect significant delays for airports being affected by the snow.

Major cities expected to experience delays on Tuesday/Wednesday will include:

It is also worth mentioning that weather models are currently forecasting another major winter storm for next Saturday and Sunday for the East Coast, with some estimates calling for up to 18 inches of snow. However, forecasts that far into the future should be taken with a grain of salt as the forecast for that storm is still highly uncertain.

Europe
No significant weather threats to shipping are forecast.

Asia
No significant weather threats to shipping are forecast.

Australia and Oceania
No significant weather threats to shipping are forecast.

Atlantic Ocean
No significant weather threats to shipping are forecast.

Pacific Ocean
No significant weather threats to shipping are forecast.

Indian Ocean
No significant weather threats to shipping are forecast.