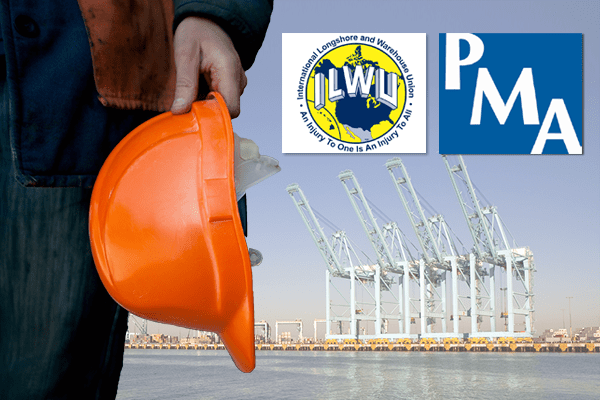 Photo Credit: The Journal of Commerce

Both Sides Pledge No Stoppage in Work

Source:  The Journal of Commerce

Update (07/07/14):  As of this morning local ILWU organizers were apparently disregarding instructions from their union leaders and distributing flyers in the Long Beach/Los Angeles harbors in hopes of starting an unauthorized protest/picket line.  So far, work is still flowing normally, trucks are passing unimpeded and no picket lines have yet materialized.

Waterfront employers and the International Longshore and Warehouse Union did not reach a contract agreement by 5 p.m. today, as expected, but both sides indicated that there will be no cargo-handling disruption at U.S. West Coast ports while negotiations continue.

“While there will be no contract extension, cargo will keep moving and normal operations will continue at the ports until an agreement can be reached between the Pacific Maritime Association and the ILWU,” the parties said in a joint release.

“Both sides understand the strategic importance of the ports to the local, regional and U.S. economies, and are mindful of the need to finalize a new coastwide contract as soon as possible to ensure continuing confidence in the West Coast ports and avoid any disruption to the jobs and commerce they support,” the ILWU-PMA release stated.

Expiration of the previous contract also means that the “no-strike” clause contained in ILWU contracts has expired. However, by stating that “cargo will keep moving,” both parties were sending a message to the shipper community that neither a strike nor a lockout is anticipated as a way to influence negotiations.

Failure to meet the July 1 deadline is par for the course in ILWU-PMA negotiations as it adds leverage to the bargaining positions of both parties. Dockworkers do not get paid if they are on strike, and employers feel pressure from beneficial cargo owners to reach an agreement.

The issues involved in the current negotiations are not considered to be of the same magnitude as the issues under negotiation in the 2002 and 2008 contracts. Those contracts resulted in significant employer flexibility to introduce technology and automation at West Coast ports.

Technology and automation were necessary to prepare the ports for the increased productivity needed to handle today’s mega-ships, but they also portended the loss of some jobs and creation of new jobs requiring advanced skills. The 2002 negotiations resulted in a 10-day employer lockout of longshoremen.

Wages, safety, jurisdiction and the ILWU medical insurance plan are the major issues under discussion this year. However, the “Cadillac” tax in the national Affordable Health Care Act that will cost the industry an estimated $150 million a year does not take effect until 2018. Negotiators may therefore choose to agree upon a three-year contract and leave the Cadillac tax for contract negotiations in 2017.

This story originally appeared in The Journal of Commerce