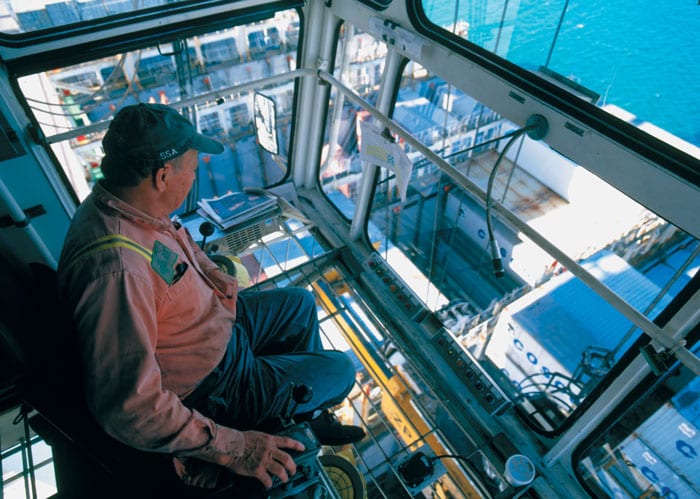 Crane operator in the Port of Long Beach, CA (Source: Journal of Commerce)

As the new year dawned a few weeks ago, we had hoped that it would bring good news in the form of a resolution to the nation’s West Coast port congestion woes. Sadly, such was not the case. The standstill at the nation’s West Coast ports drags on, with no end in sight.  By all accounts, the near gridlock situation is beginning to take a toll on the nation’s quickly rebounding economy.  Meanwhile, business owners fume, logistics companies scramble to find alternatives and government mediators accomplish little.

So what is the cause of this on-going transportation Armageddon? Let’s take a quick look. Some would place the blame on a truck chassis shortage. Others point to new, super-sized ships from Asia and the inability of the aging infrastructure at the nation’s ports to handle them. Some say too many truckers have exited the business due to low pay and increasingly expensive vehicle regulations. All of the above contribute to the problem, but it’s much simpler than that.

The Longshoreman’s Union (ILWU) has been without a contract since last summer. The port operators, known as the Pacific Maritime Association (PMA), have refused to capitulate to the union’s demands of increased wages, increased health benefits, reduced automation and expanded authority over work rules. In short, it has devolved into a protracted war of attrition. Both sides have dug their trenches and hardened their intractable positions, with little regard for the harm they are doing to businesses or the nation’s economic recovery.

So why has it gotten so much worse the last 60 days?

Since November, the ILWU has begun “hard-timing” the ports and under-manning them. That’s union-speak for a work slow down. Unions are refusing to send enough skilled labor to operate the port’s cranes, leaving many of them idle as ships sit anchored off-shore waiting to be unloaded.  The workers that are reporting for duty are operating as slowly as possible, while still technically complying with their expired contract.  The PMA reports that worker productivity has dropped from an average of 28 containers moved by each crane per hour to 20. That’s a decrease of nearly 30%. What’s worse, the PMA reported that in early November the ILWU locals informed them that the number of yard crane operators the union would dispatch each day would decrease from 110 to 35. Horrendous delays and gridlock resulted immediately.

In response, the PMA, which is incurring huge expenses because of plunging productivity, has been attempting to cut back on labor costs wherever possible. For example, terminal operators stopped night gate (second shift) operations in Seattle and Tacoma several weeks ago, and in Oakland during the past two weeks. The unions howled.

Cargo ships off the coast waiting to unload their goods in the Port of Long Beach. (Source: Los Angeles Daily News)

Steamship lines are taking huge losses as a result of the strife, as well.  With the unloading of arriving vessels having slowed to a crawl, many ships are forced to anchor idly offshore for 7-10 days until a berth opens up. While they sit, their losses mount. Consequently, outbound shipping schedules are a shambles, as nothing is arriving on time. In an attempt to defray some of their losses, carriers have begun to assess importers with a Port Congestion Fee of up to $1,000 per container.

Meanwhile, the rest of the world looks on and shakes it’s head as the reliability and reputation of the West Coast’s ports erodes daily. It’s a black eye for the country.

Where will it all end? It’s anyone’s guess at this point.

Who are the big losers in this playground spat gone global?  Certainly the two combatants and the vessel owners are. Businesses, even more so. However, in the end, the answer is that we all lose.