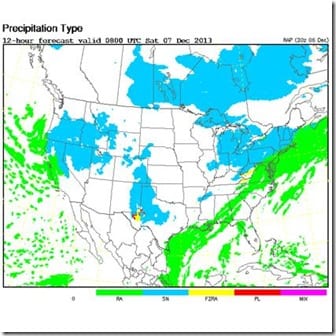 Update (12/10/13):  As of Tuesday afternoon, the East Coast and upper Midwest were both was still receiving snow, freezing rain and hazardous winter driving conditions.  Shippers should continue to expect transit delays to these regions for the next 48-72 hours.  Meanwhile, temperatures remain far below normal in Texas and the deep south, but their road and airport conditions have begun to improve and transport schedules are beginning to stabilize.  Refer to the FAA’s Flight Information Guide for the latest updates on airport closures and flight delays.

Update (12/08/13):  As of Sunday evening, all three New York metropolitan airports are reporting weather related delays of departures and arrivals due to snow and ice. Inbound flights are experiencing ground holds at the origin, delaying both passenger and cargo flights. (Source: Federal Aviation Administration)

Winter Weather Alert:  A strong cold front, Winter Storm Dion,  is currently moving through the eastern United States in association with a large low pressure system currently centered over Canada. This front is bringing a wide mix of wintry weather over a vast area stretching from Texas to New York. Although the leading edge of storms is currently rain, cities affected by this system can expect to see that rain ultimately transition to snow as the cooler air mass behind the front brings temperatures below freezing.

As rain turns to snow, large areas of the east and southeast may experience freezing rain, making driving conditions extremely hazardous.  Significant airport departure and arrival delays are expected as well. Transportation hubs expected to be affected by this system in the near future include Dallas, Cincinnati, Columbus (OH), Pittsburgh, Boston, Washington  and New York. It is reasonable to expect significant transit delays through Tuesday as the storm passes.

Meanwhile, on the West Coast a large storm is approaching off of the Pacific with significant snowfall expected in California, eastward through the Rockies. Air and ground transportation delays are anticipated from San Francisco through Denver and into Salt Lake City as the storm makes its way eastward.

Shippers are advised to expect significant air and ground transit delays over the next 72 hours in areas impacted by the storms on each coast.